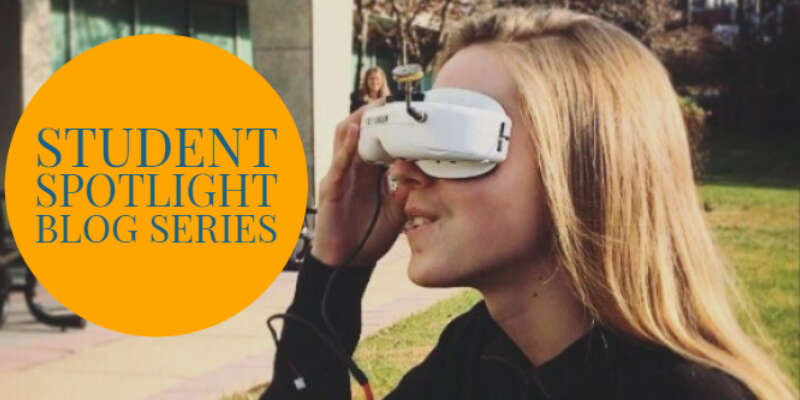 Drones have become all the rage since being made available to the general public. Today, they offer the opportunity to obtain new skills that can go beyond just having a fun hobby. For one AHCCS student, getting to experience flying a drone sparked a new curiosity for this innovated device.

8th grader Cooper Dekorte first became interested in drones after coming into the AHCCS office and seeing our Innovation STEAM Academy’s Makers Space. This is an area of our office that is dedicated to creativity, new ideas, and invention. Some projects that take place here include 3D Printing, Coding, and Raspberry Pi projects. Another important area of the Makers Space is the Drone Zone, which caught Cooper’s eye. Since then, he’s been asking about the drone course offered at AHCCS, which will start in Quarter 4. This led to Cooper coming back to the office and flying a drone for the first time. Cooper’s mom, Ms. Dekorte, tells us about the experience.

Cooper never flew a drone before that day, but he’s been hooked ever since,” she says. “What piqued his interest was the fact that you can take your interest in drones a step further by getting a Federal Aviation Administration (FAA) license. Drones can be more than just a cool toy when you have the chance to become a certified pilot.

Cooper believes that he’s so intrigued by drones because of the similar programming technology they have with two of his other hobbies. In his spare time, he loves creating maps on the game Minecraft, as well as learning more about Mars Exploration Rovers (MER). Being able to program a device to perform tasks while controlling them from afar fascinates Cooper. All three of these devices have the potential to improve science research, Cooper’s true passion.

As residents of Downingtown, Coopper and Ms. Dekorte have the opportunity to visit the AHCCS office often. They feel the advantage of being able to do this encourages Cooper to continue discovering his interest in drones. Ms. Dekorte explains how valuable the hands-on equipment in AHCCS’s Maker Space is, and why she hopes Cooper will take his new love for drones even further.

Cyber schools are still so new that they can make the experience whatever they want it to be for their students,” she says. “Being able to try something that most schools don’t offer is what makes AHCCS different. Drone technology presents career opportunities that I know Cooper could excel in, and I hope that AHCCS can eventually offer him the option to get a license to fly commercially.

Congratulations Cooper on taking flight for the first time! We hope that you continue exploring drones and all they have to offer you!

Think you might be interested in drones too? Talk to your guidance counselor today about our drone course being offered in Quarter 4!