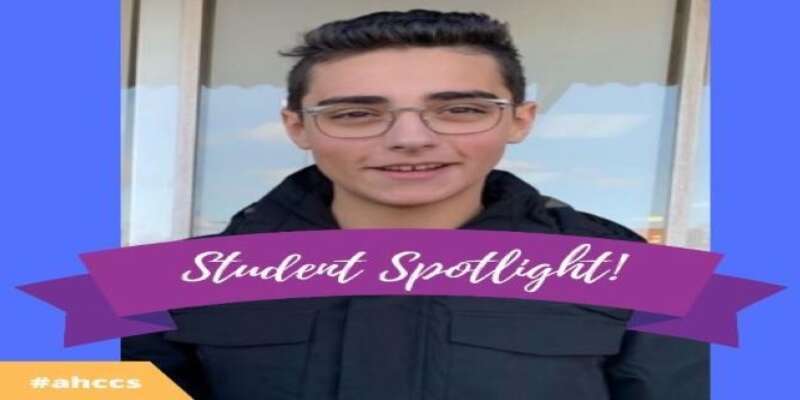 AHCCS 11th grader Noah Massart has always considered himself a very motivated individual. Even though his educational career brought him ups and downs, he always pushed through them. He feels that this mindset influenced his outlook on life and continues to inspire him to do difficult things. When Noah decided in 9th grade that graduating High School early was a goal of his, there was no stopping him.

I have always viewed the opportunity to get ahead start in life as something that would benefit me in different ways,” Noah says. “Without attending AHCCS, the goal that I have held onto and worked towards for many years would have been out of my reach. I am very glad that I have found a school where my goals have been placed back into my power.

Since attending AHCCS, Noah has had a much more flexible schedule and hoped to utilize his time more effectively. Through a connection at the Center for Adolescent and Young Adult Health (CAYAH) located on University of Pittsburgh’s campus, Noah was given the opportunity to become a remote intern. With the center’s focus being on the health and wellbeing of adolescent and young adults, Noah became part of a research study that focused on adolescents within the juvenile justice system. He shares why this project interested him so much.

Mentors used an anti-oppressive yoga instruction group to teach adolescents strategies to deal with the trauma and stress they’ve endured and develop skills to cope,” Noah says. “I was given journal entries written by the instructor that described how the mentoring sessions were carried out, any problems that occurred, and how the youths were affected by the lessons. With this information, I took important details and turned them into raw data that could be used as research results and coded into the proper data sets.

For as long as I can remember, I have always wanted to be a doctor and view the career as an important role in society that very few can fill,” Noah says. “I have always enjoyed dealing with the nitty-gritty details and problem solving in stressful situations. And yes, I should mention that I do have steady hands!

As a student who has attended numerous schools with various environments, Noah believes that a lot of thought should go into choosing the right place for yourself. While being well thought out is essential, he has also learned to trust his gut feelings. Noah felt that in order to complete his internship and reach his goal of graduating early, he needed to make a change. After extensive research, he decided that the only option he hadn’t tried yet was the right one.

I knew that in a cyber environment, the student relies more on their own resources and there is a certain sense of self-reliance that I never felt in other schools,” Noah says. “It’s for that reason that when I decided to investigate AHCCS, I knew that I needed to start building up my own resources and abilities. I have really enjoyed shouldering some more responsibility in my education, because now I can say “I learned that.

Congratulations, Noah, on all your accomplishments! We are so proud of you and know you’ll go on to do great things.